This is another article related to ExplorerPatcher and Windows 11. This time, I wanted to take a more in-depth look at the changes in the compositor shipped with Windows 11 (the “Desktop Window Manager”).

Quite a few things have changed regarding it compared to Windows 10, like new window animations when maximizing and restoring down a window, while some things have regressed: Aero Peek is more broken than ever, basically a barely working artifact that is due for removal, apparently. Some things are the same, like the bug where clicks (on the very top of the title bar, or on the corner of the close button) on a maximized System-enhanced scaled foreground window displayed on a monitor with 150% and 3840x2160 resolution go to the window behind it, potentially accidentally closing it.

There is a rather visible new addition though: the window corners are now rounded. The whole design aesthetic for Windows 11 proposes rounded things everywhere. Personally I like them, but a lot of people do not, and for good reason: it would have been logical for Microsoft to offer at least a hidden option to enable the legacy behavior from Windows 10, where the corners are sharp, 90-degree angle. Unfortunately, they did not, so we are once again left to scramble through their executables and see what we can find.

The Desktop Window Manager is powered by many libraries; the one that apparently is tasked with doing the actual drawing on the screen surface is called uDWM.dll. I am a bit familiar with it from my work on WinCenterTitle, a program which let you center the text displayed in the non-client title bar of windows, as in Windows 8 and 8.1. Take notice, I said non-client: the compositor is only responsible for drawing the title bar of windows that do not elect to do it themselves (and inform it so). More and more applications are moving to custom-drawn title bars (or how the GNU/Linux/GNOME user land calls them, “client-side decorations”); whether that’s a good or a bad thing, that’s a subject of much debate. Thus, the effect of the patch becomes less and less impressive and consistent, as some applications will have their text centered while a whole host of others won’t. The operating system does not provide a mechanism to inform applications how the text should be drawn: it is generally implied that the text is left-aligned, while Windows 8 and 8.1 should be treated as the exception and the title be custom-drawn centered there. Again, very poor design from Microsoft, if you ask me.

Okay, so let’s start with uDWM.dll. If you look through the method list for it, one can quickly find a very interesting function: CTopLevelWindow::GetEffectiveCornerStyle. Here’s its pseudocode:

Let’s analyze it a bit. For once, we can determine which branch in that main if is taken at run time on a system where rounded corners work in Windows 11 (more on that a bit later), and also determine the actual return value.

Because we need to attach a debugger to dwm.exe, things are a bit more complicated: you have to debug it on a virtual machine (or on a remote system in general). You can’t debug it on your development box as breaking into dwm.exe will prevent it from drawing updates to the screen, and thus you won’t be able to operate the computer.

As usual, I use WinDbg. Start it on the remote computer. Now, there are 2 methods to go on:

Okay, so inspecting this function at runtime, we can see that it returns a 2. If we statically patch it to return a 0 or a 1, window corners will draw not rounded. So, that would be it, right? Actually, this patch was already implemented in my previous Win11DisableOrRestoreRoundedCorners utility, so why all the fuss with this article (I mean, it was quite popular, to the point that it got featured in a LinusTechTips video. Well, I have 2 more goals for this:

Yeah, so the conclusion is: rounded corners are disabled when the software display adapter is used, or when connected via certain remote sessions. Also, there are a couple of avenues. At this point, my idea was simple: have the CTopLevelWindow::GetEffectiveCornerStyle function somehow return 1 via the methods described above.

Well, I did that, but it has at least one nasty effect: context menus are drawn without a shadow. It kind of makes sense, if we look at where the function is called from at runtime: CTopLevelWindow::UpdateWindowVisuals. In there, of interest is a float that is initialized to 0.0 and then assigned some value when the corners are determined to be rounded - probably the radius of the curve. When corners are not touched, the number stays at 0.0. If we look further down, there is an if check: if ( (v10 & 0x20) == 0 && (IsOpenThemeDataPresent() && (v10 & 6) != 0 || v4 > 0.0) ). I tired messing with it in all the ways, in combination with patching CTopLevelWindow::GetEffectiveCornerStyle as well - I always broke some scenario: I had windows without shadows, windows that are drawn square cornered even when rounded corners are enabled (tooltips, for example) display visual glitches, the mouse display visual glitches (a transparent box behind it when clicked). I was stuck…

Then, after playing with it a bit more, I cam around with some other idea: how would we go about modifying the least amount of code and logic and still achieve what we want? Well, since the radius seems to be a float, what if instead of 0.0, which would give us 90-degree angles, we’d make it 0.00001 let’s say. That so small it would look like a square on the screen. Also, keep in mind that the thing is rasterized in the end and you have only a handful of pixels, so a very small float that’s not zero is basically zero.

Okay, so let’s inspect what happens with the value we get from CTopLevelWindow::GetEffectiveCornerStyle:

Actually, the pseudocode this time is pretty bad. The raw diassembly is much better:

So, if the corner style is 2, we jump to that place where we make the weird GetCachedVariantState call. Then, we move some value from the stack in rax and from there convert it to a single-precision floating point number.

At runtime, the value we obtain is 0x8. It’s pretty weird… I investigated with different values, it doesn’t seem to actually hold a meaningful IEE754 single-precision floating point value, or maybe it just didn’t tick for me how to work with it. Anyway, by experimenting, I saw that a 0x0 there is essentially CTopLevelWindow::GetEffectiveCornerStyle returning 1, while if we set to 0x1… boom, we get the nice 90-degree corners from Windows 10, complete with the context menu working.

Okay, so it seems the way to go is to make the radius as small as to be basically square nut not mathematically square, so dwm.exe would still think it works with rounded corners.

How do we patch? Well, if we look at the disassembly, we see that xorps xmm6, xmm6; cvtsi2ss xmm6, rax only appears in constructs specific to a check similar to the one showed here after getting the corner style. So it’s actually safe to patch based on this pattern. But how? Well, again, if we look at all the 4 matches, we see they are all preceded by a mov instruction that fetches the value that will be ultimately converted to a float. So we can overwrite that safely, and in all places is even better, it is as if it would have read that value. So, how long is the mov? Well, 4 bytes. We need to write a 1 there, so mov eax, 1 which is b8 01 00 00 00 which is… 5 bytes long :(… CISC baby, what do we do now? Well, we take advantage of the fact that x86 has a billion instructions and opcodes, so we can trick it in 4 bytes like so: xor eax, eax; inc eax - 31 c0 ff c0. Oh yeah, good old inc.

Naturally, the way to go for this is to create a service, as that always runs as SYSTEM. So, we create a service that enumerates the Desktop Window Manager processes and patches 4 bytes at various locations. Since we only do that, no need to run remote code, we can forego injecting in dwm.exe and instead use ReadProcessMemory and WriteProcessMemory to alter its memory.

An example implementation is here (ep_dwm). it can be compiled as a library and then called from your own application, for example. 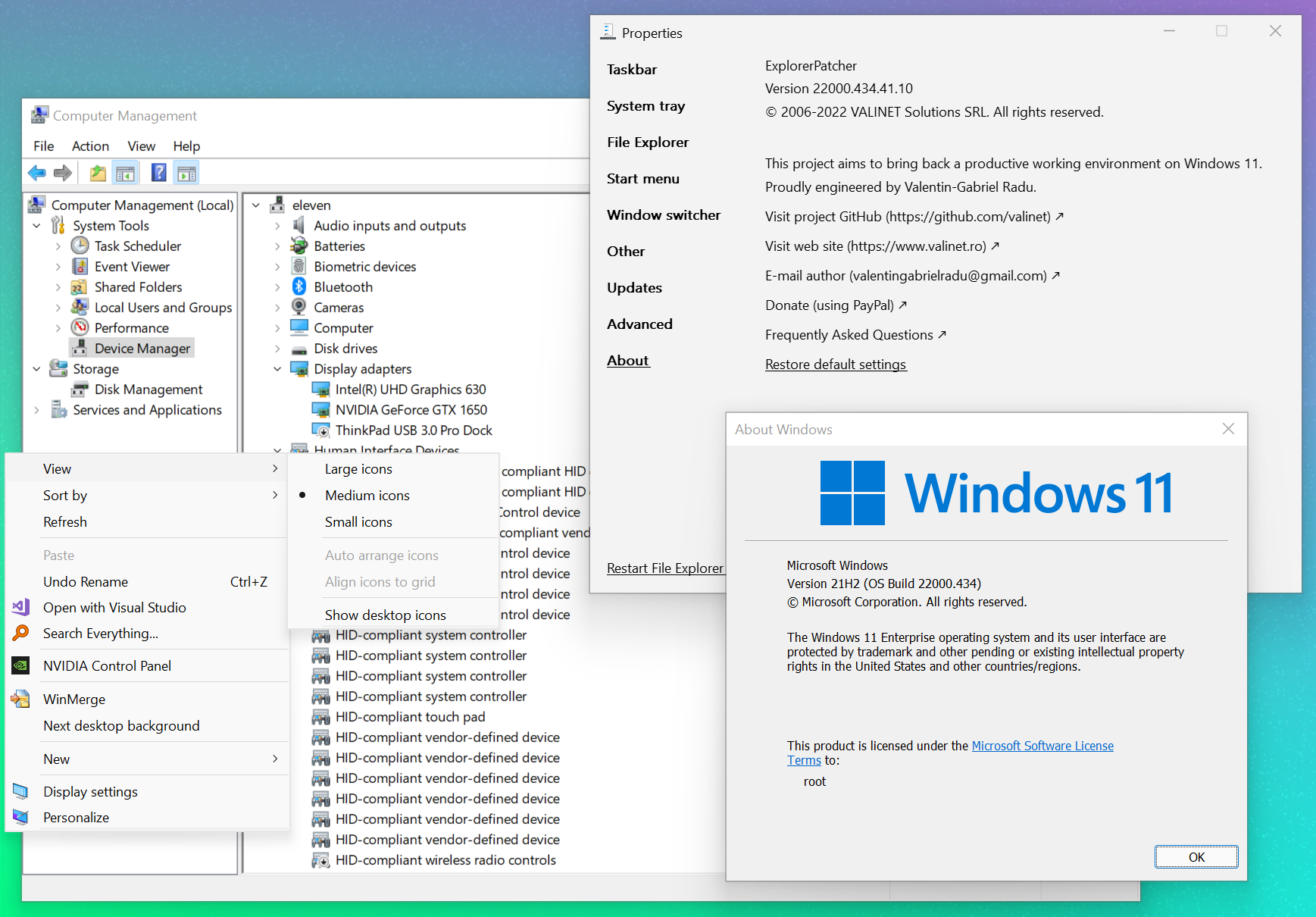 That’s it! The functionality has been incorporated in the latest ExplorerPatcher, version 22000.434.41.10. Hopefully it will serve you well.

Update (29/08/2022): I also recommend checking out this project on GitHub. It basically patches CDesktopManager::s_pDesktopManagerInstance + 28 to be a 1, with all the quirks described above (context menus and some windows, like the UAC prompt, do not have shadows). Still, it is an alternative to my strategy here. Hopefully, one day, I will have the time and maybe integrate this into ExplorerPatcher as an option.